CHICAGO (AP) Vladimir Tarasenko had two goals and an assist, and the St. Louis Blues beat the Chicago Blackhawks 5-2 on Wednesday in a clash on the opening night of the Central Division rivals.

Kevin Shattenkirk and Paul Stastny each had a power-play goal and two assists for the Blues, who eliminated the Blackhawks in seven games in the first round of the playoffs in April. Jake Allen had 17 saves in his first game since he became St. Louis' clear No. 1 with commercial goalie Brian Elliott June to Calgary.

Richard Panik and Ryan Hartman scored for Chicago, which had six rookies in the lineup, including two children playing in his first NHL game. Corey Crawford finished with 29 saves.
Posted by Unknown at 8:44 AM No comments: 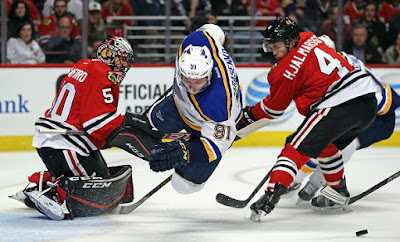 Chicago Blackhawks defenseman Niklas Hjalmarsson has been suspended for the first game of the regular season against against St. Louis.

Its open ice hit in blue forward Ty Rattie in a preseason game Saturday was the cause of his suspension, which also includes the rest of the preseason.

Rattie reporters after that game that was fine, and then recorded an assist in Monday's game against Washington. Hjalmarsson suspension also cost you $ 23,000 in salary.

Hjalmarsson has played 37 career games, regular season against the Blues. In those games he has acquired 17 penalty minutes, the third most for him against any individual computer.

Blues have two games remaining in the 2016 season. Washington received Wednesday at 7 p.m. then host the Blackhawks on Saturday October 8, at 7 pm These two games can be heard on KMOX or Y98 HD3.
Posted by Unknown at 9:14 AM No comments:

I'm A Little Over The World Cup Of Hockey, I Think 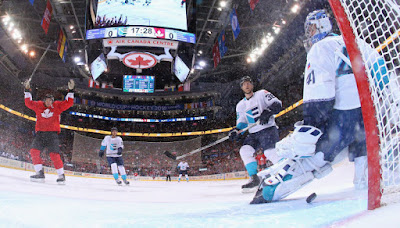 The finals of the World Cup hockey best-of-three is not over, but the tournament may as well be. Team Europe has played in their 3-1 loss in Game 1 undefeated Team Canada, but despite being a set a goal for most of the second well in the third, it never really felt much doubt. This was Canada's tournament to win from the beginning, and now they are about, it all feels a bit disappointing.

European gamers said they played their best match of the tournament last night in Toronto, but it was still not enough. They, like everyone, have no answers for frontline Sidney Crosby, Patrice Bergeron and Brad Marchand in Canada. Through five games, the three have combined for 10 goals and 19 points. second goal last night was prototypical Line: Crosby running things from behind the net, Marchand causing trouble before it, and Bergeron wins the position to do damage. They invaded by five European skaters, and it still looked effortlessly:

Halak's up to the task

Ask for the scoop on "ice cream kid" and you shall receive. The identity of the young Blackhawks fan who caught the sports world's attention by getting caught on camera "going to town" on some soft-serve is now known: It's 8-year-old James DeYoung III of Lincoln Park.
"Look at him! Look at him! He's going at it! That's right! How many licks to the center of a soft-serve ice cream?" Blackhawks commentator Eddie Olczyk yelled during the Hawks game against the Red Wings Sunday, playing off the one-time Tootsie Pop ad slogan. Since then James' video has popped up various places online.
So what's it like being an instant celebrity sports fan?
"Awesome!" said James, who attends Lycee Francais de Chicago. "I couldn't hear (Olczyk's comments at the game) but when I got into the car and I heard it, it was pretty funny."
James' father, Jamie DeYoung, who took his son to the United Center on Sunday, told the Chicago Tribune he was surprised by the amount of attention his son received while simply eating ice cream at a game.
"My son's loving his 10 seconds of fame," he said. "I think it's great for him. If people are having fun in a good way, I think it's fine."
It certainly delighted Olczyk and his broadcast partner Pat Foley.
"All right, breathe, breathe," Olczyk said during a break in the game. "I sound like Ted Cruz right now."
Olczyk used a telestrator to analyze the kid's technique. "Watch this area here. And it's just all, I mean he's going to town. No drip, no nothing."
Posted by Unknown at 10:40 PM No comments:

The Chicago Blackhawks Jersey selected left wing Graham Knott with the 54th overall pick in the second round of the 2015 NHL Draft.

Knott, a 6’3″ winger from Etobicoke in Ontario, Canada, scored 25 goals and had 18 assists in 59 games with the Niagara IceDogs of the Ontario Hockey League last season.

In the third round, the Blackhawks selected 6’2″ defenseman Dennis Gilbert with the 91st overall pick. The Buffalo, New York native played 56 games last season with the Chicago Steel of the USHL, scoring 4 goals and 21 assists.

In the fourth round, the Blackhawks picked another American defenseman, drafting Ryan Shea from Milton, Massachusetts. Shea played at Boston College High School and is committed to play at Northeastern University. Patrick Kane Jersey.

Slovakian right wing Radovan Bondra was the Blackhawks pick in the fifth round. The 6’5″ winger scored 2 goals and 2 assists playing with HC Kosice in the Slovak Extraliga last season.

With their first pick in the sixth round (164th overall) the Blackhawks selected Geneva, Illinois native Roy Radke, a 6’2″ right wing. Radke scored 9 goals and had 9 assists in 64 games with the Barrie Colts of the OHL last season.

With their second pick in the sixth round (181st overall), the Blackhawks selected Finnish defenseman Joni Tuuola.

CHICAGO (AP) Corey Crawford Jersey threw his gloves off and ditched his helmet as the Chicago Blackhawks poured onto the ice and swarmed the goaltender at one end of the frenzied United Center.
And just like that, the celebration was on. The marquee at Wrigley Field had a congratulatory message for the Stanley Cup champions, and there were fireworks and honking horns all over Chicago.
Call it a Windy City party 77 years in the making.
Duncan Keith scored in the second period and led a dominant defense that shut down Tampa Bay's high-scoring attack, and the Blackhawks beat the Lightning 2-0 in Game 6 on Monday for their third NHL title in the past six seasons.
Patrick Kane had a goal and an assist, helping the Blackhawks clinch the Cup on home ice for the first time since 1938. Crawford, who was pulled from Chicago's first-round series against Nashville, had 25 saves in his fifth career playoff shutout.
Read more »
Posted by Unknown at 5:53 AM No comments: